Orthographic projection is the drawing that shows the form angles, dimensions, and angles of each component of the object to be built as they are. Due to this distinctive property, it is an accepted drawing used in the construction industry. As a result, it is often employed in production. 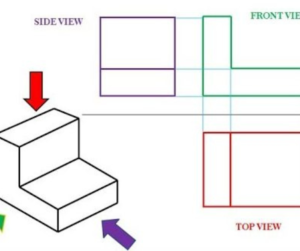 These two planes intersect, producing four quadrants. The object to draw will be located within one of the quadrants. Orthographic views of it are projected onto planes.

The object is usually set up so that its principal faces are parallel to each other. This makes sure that the angles of the faces are accurate dimensions and shapes.

2. Horizontal plane It is depicted in the plane of horizontal.

A cross-section of horizontal and vertical planes.

The image above illustrates the intersecting of horizontal and vertical planes with right angles. The intersection creates four angles: which are the initial angle, the second angle, the third angle along with the fourth angle.

The quadrant between 0 and 90deg is the first angle, while the quadrant 270deg-180deg holds an angle of 3.

In orthographic projection, only the first and third angles are employed.

Because the fourth and second quadrants are a way to blend both systems of measurement, we don’t make use of them.